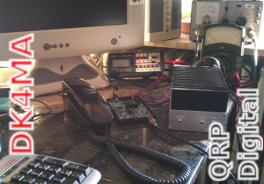 Amateur radio signals typically come in weak power and small bandwidths. Once they are picked up from a good antenna and large out-of-band signals are effectively filtered, it is quite possible to build great receivers, that sample either the HF directly or at an intermediate frequency and perform subsequent steps of filtering, mixing, decoding and amplfication in software on a single microprocessor or a combination of processors and the various types of programmable logic arrays available today, that may even be geographically more or less dispersed and interconnected by networks, ranging from onboard interlinks, over LANs up to the internet. Available commercial hardware as well as successful amateur projects demonstrate that and offer ways to build systems, that were just not possible in terms of money, even 10 years ago.

Falling prices for digital and even hybrid analog components made this possible and everyone can effectively build a wideband receiver for 10€ by putting in a close to invisibla device in ones USB port and use one of the freely available programs with it. While these types of devices also clearly show the limits, one must admit that they have their use, eg. even in the field of radio astronomy and at the same time bring many new people to try themselves in radio transmission. Impressive gear is designed and built by amateurs and the high end devices shorten the path from development to production of scientific and commercial applications. Finally, amateur radio enthusiasts like me, want to experiment with digital radios.

Is the HackRf an amateur radio transceiver ?

On first glance the HackRf seems to offer a flexible, fully digital wide band transceiver with a frequency range from the 80m band up to 6cm. It is open source hardware that can be used with a wide range of open source software, every part of the system can be modified and experimented with - attractive and somehow close to the ham spirit.

It was clearly designed for other applications: A portable short range measuring and experimentation tool for ISM devices, Wifi, GSM and LTE.

The receiver is not overly sensitive by itself, no filters of any sort are provided to keep big signals out, the whole circuit, without any shielding is exposed to any kind of stray energy and the transmit power is not sufficient to drive a PA without amplification. The A/D and D/A converters offer an impressive bandwidth, but the smallest filter still is 1,7MHz wide, the 8bit I/Q conversion has a limited dynamic range and the HF signal path, while tuning quite fast, can not be set to two independant frequencies for transmit and receive at the same time.

Most open source programs are able to receive data from the HackRf and many decoding routines are available. Encoders begin to emerge, even a complete GSM solution.

Active filtering of the many mixing products from large signals and the many oscillators is yet to come and on the TX side any project must consider the massive broadband spectrum of digital signal generation.

I lost a nice and rather complete shack to burglars, starting completely from scratch again. I also moved from an open area in the country to a smallish flat with only a narrow balcony. To make the best of it, i redefined KISS to "Keep it small & software based".

A cheap DVB-T dongle and gqrx made my first SDR receiver and a collection of BiQuads from installation wire, were easily fixed on the walls of the balcony, thanks to the foam insulation that also provides distance and shortening factor to the reflecting steel in the walls.

My AIS station receives 10nm of ship traffic on river rhine and i am qrv on 2m and 70cm, most of it through all the walls of the house in my back. Then i bought the HackRf and a small Diamond telescopic antenna, but first glances and experimentation made me regret that a bit. A week of hacking on a driver for Linrad gave me the same feelings. The hardware needs some fixing and shielding first and the firmware a complete redesign and rewrite from scratch, as i had instant problems integrating the driver into Linrads design properly.

After that i spent the holidays building a 10W MOSFeT PA to find, that the HackRfs gain is not sufficient to drive it. Still, the spectrum produced at the dummy load was enough to not just drive me crazy - but then again, the top ranking Storno CQP863 i found in the garbage was also hard to define, even on which band it was actually transmitting and the ladder it puts on 160MHz is quite impressive too ..

So, i'm not just stuck with the HackRf, now i am challenged!

Since i am somewhat sight disabled since the time of the raid of my house, Linrad gave me a hard time with its ancient 80 column formatting of the C source and at the same time let me enlarge the characters on my screen enough, to be able to work with it.

Linrad is a great piece of software from Leif, sm5bsz, that started its life on MS-DOS and is actively developped enthusiastically until today. It sampled receivers using a soundcard and put the data mainly on a nifty 3 stage pipeline of FFTs plus a bunch of sophisticated baseband routines to filter, decode, noise blank and display all sorts of spectra, waterfalls, signal strength and polarization of the received signals, when used with two antennas.

The program constantly evolved using available speed ups of processors, like eg. MMX and today even OpenCl is engaged, Windows and Linux Versions all for Leifs own DX work on EME and Scatter on 144MHz made him a quite known OM and Linrad a sophisticated measurement tool.

I enjoy (and recommend) listening to the educated writings on sm5bsz.com that opened quite some new insight on radios, their limits and in solid experimentation with the electromagnetic field.

I presume that he is not a friend of the HackRf and parts of the SDR community in general. I deduce that from postings and the fact, that my google group request was rejected without any comment ;-)

Since he also dislikes milestones/tags in svn, he is giving everyone packing or hacking the software regular surprises, in that the patches no longer work on the changed sources and one will happily start over again quite some times - i wish the hard work i have put into that can convince him of my true sincereness on a not too far day ;-) :-)

(Of course this text is only for you to see and edited before publication ;)

The driver for the HackRf is a first working version